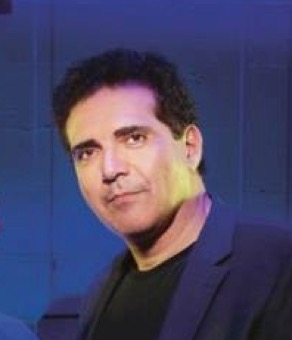 ★ Internatioanl human development expert focused on maximizing the personal and professional goals of creatives and  entrepreneurs around the world. ★ Internatioanl transmedia writer, producer, and consultant ★

★ Michael is a transmedia creative, forward-thinking media & entertainment industry executive, consultant, and Executive Director with 25+ years of experience coupled with expertise in analyzing, recommending, and implementing business structures and programs that elevate and revitalize business operations. He has a track record of leadership, global management consulting, television series/limited series, motion pictures, new media, and theatre production, writing, and managing high-profile entertainment programs. He has a deep understanding of the media & entertainment industry landscape and is familiar with key challenges facing the industry. He is skilled at performing strategic analyses of business operations and provides in-depth recommendations for organizational change, process transformation, and digital operating models.

★ As a coach to thousands of creative entrepreneurs - in one-on-one, small groups, and large groups settings, Michael has coached screenwriters, producers, playwrights, actors, directors, novelists, as well as artists by supporting their growth and development in their creative and business domains. He has designed, facilitated, and produced transformative training and development programs, and workforce development programs in the U.S. and abroad. He utilizes his own curriculum and methodology to which he has owned a copyright since 1997.

★ As an organizational consultant, Michael has experience as an acting CEO/COO and has consulted for 5 of the top 6 entertainment companies to develop organizational direction, skills analysis, HR strategies, performance management, cultural change assessment, service transformation, and operational changes. He understands the impact of new and emerging digital technologies on consumer experience. Through best practice principles, thought leadership, methodologies, and solutions, Michael articulates client recommendations and drives the implementation process.

★ As a publisher, Michael worked with Sega, Coamix, Hakuhodo, and Toppan Printing of Japan to launch a manga and anime company in the U.S. named Gutsoon! Entertainment. There he published 67 graphic novels and 36 issues of a monthly manga magazine, secured national distribution, produced experiential marketing campaigns across the U.S. including Comic-Con and WonderCon. He also secured offers on two properties for motion picture adaptations at New Line Cinema.

★ As a writer, Michael began his writing career as a journalist at The Connecticut Post's precursor - The Bridgeport Post, and has also written for Produced By,  As a screenwriter, Michael has written for the television series "DTLA," and the limited series "Jack Hunter." He is developing the half-hour pilot titled “Willing & Abel," and a motion picture drama titled "Again." He is often hired to rewrite material for producers based on budgetary requirements/constraints.

★ As a producer of national and international live, cause-related events, Michael produced "Circle Up Now," a worldwide Amnesty International experiential program to celebrate the UN's 60th. Anniversary of the Universal Declaration of Human Rights. He has also been involved in projects such as “Hands Across America,” “We Are The World,” and "Millennium Live." He helps create visceral experiences through which individuals and communities are empowered and compelled to take action on specific issues.

★ He is passionate about supporting underrepresented communities to tell their stories.

★ Born in Argentina, he lived in Italy prior to moving to the United States. A gay man (he/him/his), he identifies as Latino and, thanks to his mother's lineage, is also part of Argentina's indigenous community. He speaks three languages (English, Italian, Spanish). He has had the privilege of working in 16 different countries. He began his career on stage alongside his father, an opera prime tenor.

Helping my younger brother learn to walk again and recover from a motorcycle accident.